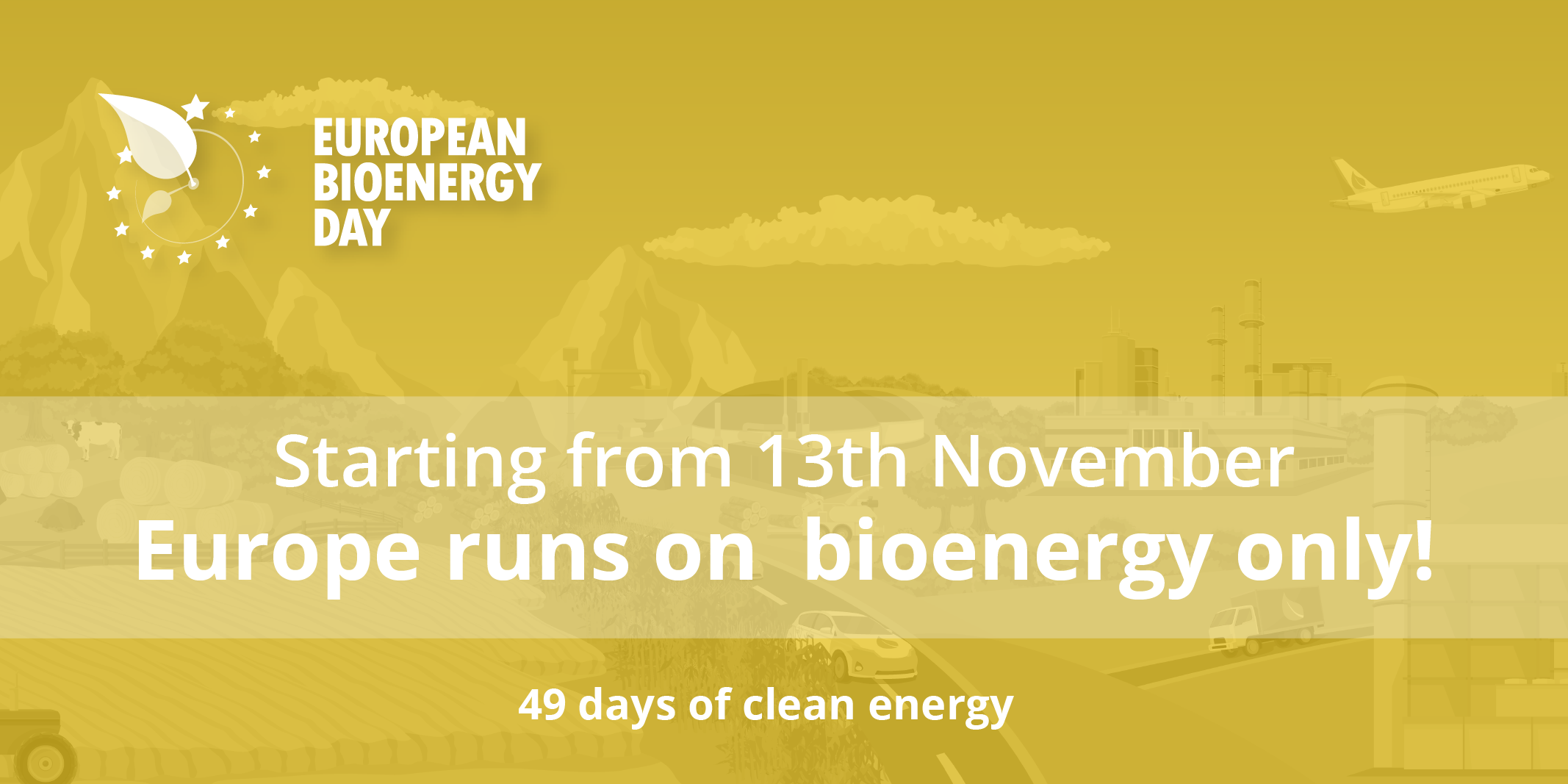 Brussels, 13th November 2020 -  The 13th November marks ‘European Bioenergy Day’ and with it, Bioenergy Europe is pleased to announce the launch of the fourth edition of the European Bioenergy Day campaign. The campaign aims to shed light on the increasingly central role that sustainable bioenergy is playing in Member States’ energy mix. When each national Bioenergy Day is celebrated, a corresponding success story is published for that country. These stories highlight the people, projects and companies that are contributing to European carbon-neutrality and bioenergy’s increased success in greening transport, industry, and buildings.

Bioenergy is playing an increasingly important role in the European Union’s energy transition and in supporting its ambitious climate targets. As of the 13th November, bioenergy alone will be able to cover all the energy needs of the EU Member States until the end of the year – that’s 49 days of energy supplied entirely by bioenergy!

This year’s impressive European Bioenergy Day date confirms past years trends and signifies the growth experienced by the European bioenergy sector as it comes to play a more central role in the renewable energy transition.

While bioenergy continues to steer Europe towards a carbon-neutral free contributing already with 10.3% of the gross final energy consumption, recent gloomy number only serve to highlight how Europe remains excessively dependent on fossil fuels (82.5%) – with subsidies continuing to head in the wrong direction. Spreading the projection for Europe’s energy demand across the calendar, we see that the EU continues to rely on fossil and nuclear energy for a worrying 282 days in 2020 (January 1st to October 9th). All renewables combined account for 84 days of clean energy (from October 10th onwards) and among these, bioenergy alone contributes to an impressive 49 days (November 13th to December 31st).

At EU level, this accounts for four additional days of renewable energy compared to the previous year. And – thankfully – when examining single countries’ figures, a similar positive trend emerges. Countries such as Denmark, Finland and Sweden have seen an impressive net increase in bioenergy consumption ranging from 3 to almost 5 extra days!

Contributing to nearly 60% of RES gross final energy consumption, bioenergy is a leading source of renewable energy. The bioenergy sector contributes to the creation of more than 700,000 direct and indirect jobs in Europe, representing 49% of all RES jobs. Moreover, with European-based industry accounting for more than 50,000 businesses across the continent, bioenergy produces an annual turnover of nearly €60.6 billion and net export worth €5 billion, bioenergy makes a substantial contribution to sustainable economic growth. By 2050 it is estimated that there will be 460 Mtoe of sustainable biomass available, including residues from forestry, agriculture, industry and organic waste: that’s the equivalent of 1.624 oil tankers, each gravid with 2 million barrels!

Considering the challenge that Member States’ face, given the urgent need to develop large scale renewables, combined with energy efficiency in order to meet Europe’s ambitious climate targets, bioenergy can play a pivotal role. This quantity of bioenergy could meet more than half of the EU’s final energy demand by 2050! But regardless of this, bioenergy remains one of the least know forms of renewable energy and often lies outside of the public’s knowledge. Yet, in 2017, solid biomass consumption helped save €40 billion worth of fossil fuel and contributed to GHG emission reduction at the rate of 1 million tonnes a day.

Bioenergy Europe believes that it is people who are driving bioenergy’s contribution to carbon neutrality. That is why through this year’s success stories, the European Bioenergy Day campaign is highlighting the individuals, companies and initiatives that are helping Europe to reach its ambitious climate targets through bioenergy – an available, affordable and viable solution.

Powered by Bioenergy Europe and supported by national partners and stakeholders across Europe, the European Bioenergy Day campaign expounds the belief that bioenergy is more than just a renewable energy source. Rather, it is a reliable path that will lead Europe to achieve its renewable energy transition in the shortest time frame. Bioenergy Europe and its partners wish for bioenergy to be recognised as a key agent in leading Europe’s industry, transport and buildings towards a carbon neutral future.

For more figures, data and infographics visit the campaign’s website.

Thank you for subscribing to our newsletter. You have been added to our distribution list.